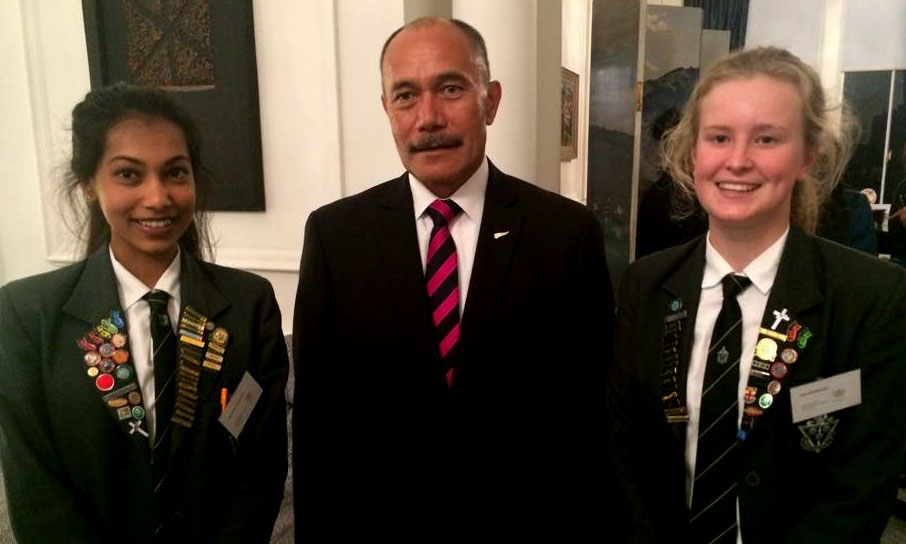 Sarsha and Ellie with the Governor General, the RT Hon Sir Jerry Mateparae

Ellie Beverley and Sarsha Sivanantham represented Marsden at a reception at Government House celebrating Nationhood and the contribution to New Zealand’s social, economic and cultural wellbeing from people of all walks of life.

2015 has been a year of significant anniversaries in the story of New Zealand. It’s 175 years since the first signatures were put on the Treaty of Waitangi, 150 years since Wellington became our capital, and 100 years since the Gallipoli landings and battles. Two weeks ago, we marked another significant turning point in our history, the arrival, 40 years ago, in Wellington of the Land March – the hikoi led by Dame Whina Cooper – which led to the establishment of the Waitangi Tribunal.

These anniversaries have all been a time to reflect on events that were important milestones in our history, events that helped to shape our country. The optimism and courage that our forebears had in coming here, the hopes they brought with them and the diligence and optimism with which they and we have worked for our nation – our nationhood – represents the country that we will leave for our children and their children and their children’s children. For all of these reasons, 2015 is an appropriate year to celebrate our Nationhood.

Kia ora huihui tātou katoa, Let us all live together

Excerpts from a speech made by our Governor General, the Rt Hon Sir Jerry Mateparae, at a Nationhood celebration at Government House on 28 October 2015.

Read the full speech at: http://livenews.co.nz/2015/10/28/nationhood-reception-wellington/#sthash.lamjQJ0c.dpuf