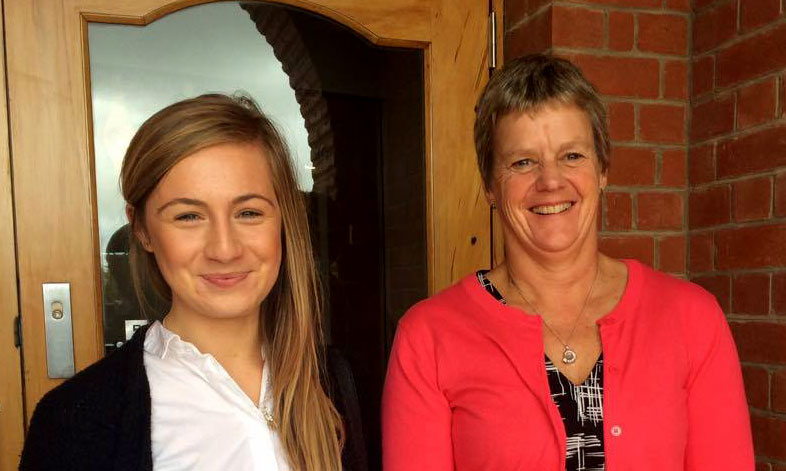 Working with animals in Africa

It was really lovely to have Old Girl Beckie Calder-Flynn address assembly this week. She spoke passionately about her work with animals in Africa.

Beckie was at Marsden from 2005 to 2011 and was Head of Upper School in her senior year. She loves biology and credits her early interest to "the amazing Mrs Gunn for putting so much passion, enthusiasm, and baby animal pictures into her classes." She went on to study at Auckland University, majoring in biological sciences.

Following graduation, Beckie travelled to Africa and her first stop Thuma Forest Reserve in Malawi. This is a protected forest area and home to one of only three increasing elephant populations in Malawi. Unfortunately drought and failing crops, ivory poaching, and deforestation are constant threats to these elephants. Beckie spent days patrolling with armed scouts, searching for elephants and hunting for poachers. She set up camera traps to get pictures of the animals in the forest, which helped identify elephant families as well as new species!

Beckie sees education as one of the biggest problems. She visited schools trying to teach them the importance of protecting animals and their environment. Human-animal conflict is a huge issue all over Africa and understandable when crops are failing and people are starving. However she can't believe people still want to hunt animals for trophies, and maiming these beautiful creatures to sell their tusks for US$50,000 is an outrage.

Leaving the forest after 3 weeks, Beckie went to work at the  Lilongwe Wildlife Centre which is a sanctuary and rehabilitation centre for animals. While there she hand raised 3 orphaned baby vervet monkeys, feeding them 7 times a day, so they could be successfully released back into the wild.

The Liwonde National Park is the largest national park in Malawi and also home to Carnivore Research Malawi, Beckie's next stop. Here she spent her nights tracking Hyena as part of the hyena translocation project which transports problematic urban hyenas and introduces them into the national park.

In her words, "It wasn't all glamourous ... I spent hours sifting through hyena poo for hair samples of different animals, got bogged in our land rover so many times (once surrounded by lions hunting in Zambia), stayed out all night without finding any hyena, dodged snakes, was charged by elephants, and had to watch out for animals every night when I had to walk 100m to the toilets." The other big thing she did was collect snares. Snares are the cheapest, laziest and one of the most inhumane ways to catch animals, they don’t discriminate, so every snare collected was an animal saved.

Beckie told our students that they can make a difference. She said "It is so easy to be sucked into thinking  ‘I’m over here in NZ, a young girl, I can’t make a difference’. Absolutely wrong. Every little thing you do, no matter how small, makes a difference. Plant a tree. Recycle. Adopt a pet from a shelter. Eat more veggies."

She left us with a saying written by Loren Eisley and her answer to why she's a vegan, to why she searched for snares one by one, the reason why she spent hours sitting on the floor covered in baby monkey pee ...

‘A girl was walking along the beach, picking up starfish that had been washed ashore by the incoming tide. A man came over to her, and was confused by this. ‘Why are you throwing them back in, there are far too many for you to ever get them all, and many of them will just be washed back in with the next tide? You can’t possibly make a difference’. The girl threw another starfish into the water, and turned to the man ‘I just made a difference to that one’. To the world, that is just one starfish, or elephant, or Impala. But to that one animal, one small action can mean the world.'

Beckie likes to think of herself as that girl.

Thank you for visiting Beckie, you are an inspiration to us all. Keep up the good work.

"It is so easy to be sucked into thinking ‘I’m over here in NZ, a young girl, I can’t make a difference’. Absolutely wrong. Every little thing you do, no matter how small, makes a difference. Plant a tree. Recycle. Adopt a pet from a shelter. Eat more veggies.