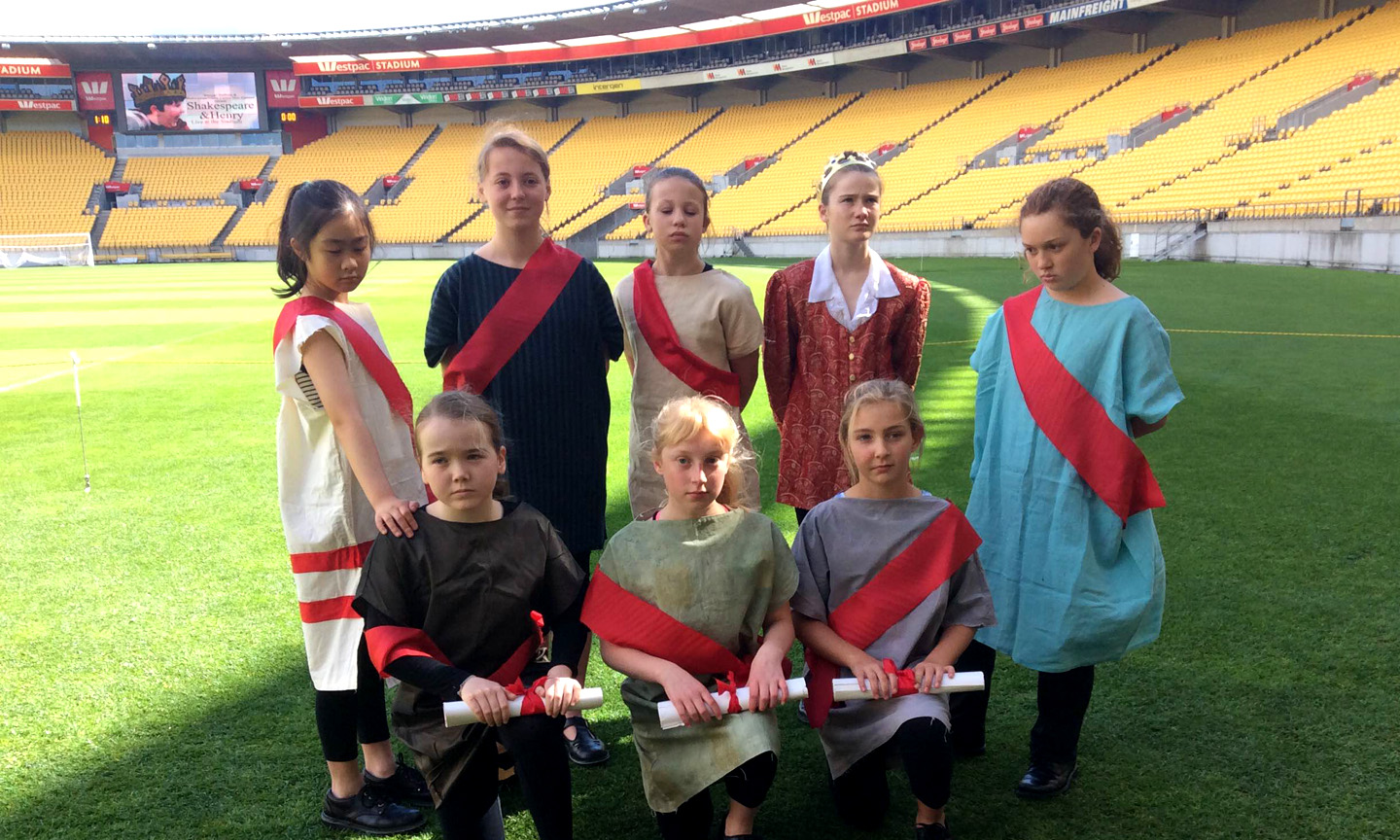 Once more unto the breach, dear friends, once more...

What an amazing experience for Year 6 students Louisa Boyer, Joyce Chan, Scarlett Henry, Zoe Kreyenhop, Lucy Mirfin-Newman, Lucy Penn, Nadia Vinaccia and Grace Wala who joined approximately 250 other primary students on Tuesday to perform a 90 minute version of Shakespeare's Henry V at Westpac Stadium. This is the third 'Primarily Playing with Shakespeare' production presented by Shakespeare Globe Centre New Zealand (SGCNZ) and is part of Shake Alive 2016 - the celebration of the 25th anniversary of SGCNZ and the commemorations the 400th anniversary of Shakespeare’s death.

Students from eight primary schools and a homeschool group met for the first time on Tuesday morning for a run through before making their public performance at 12.30pm. Our girls delivered Act II, Scene II, where King Henry uncovers traitors on the eve of battle, directed by teachers Kate Feary and Rebecca George with mentoring by Ania Upstill (appointed by SGCNZ). Their scene included a jig, a battle, lots of lines and tricky language but the girls carried it off with confidence, Lucy Mirfin-Newman was superb as Henry.

We think their words sum up this experience beautifully:

"It gave us a good taste of what it is like to be in a Shakespearean production, and to perform with kids from other schools" Louisa Boyer

"It was fun because you get to know about Shakespeare's writing. We learnt about voice projection because we didn't have fitted microphones" Joyce Chan

"It was very different to what I'm used to. At the beginning I didn't really understand the context of the play, but it got clearer as we went along. I thought we did a great job persuading the audience with our characters" Scarlett Henry

"It was a new and exciting experience and we all really enjoyed it. Learning lines for almost everyone was hard, but I liked learning an almost new language" Lucy Penn

"When we were on the stage, it was easy to forget lines because the language was so different" Grace Wala

It was a new and exciting experience and we all really enjoyed it. Learning lines for almost everyone was hard, but I liked learning an almost new language