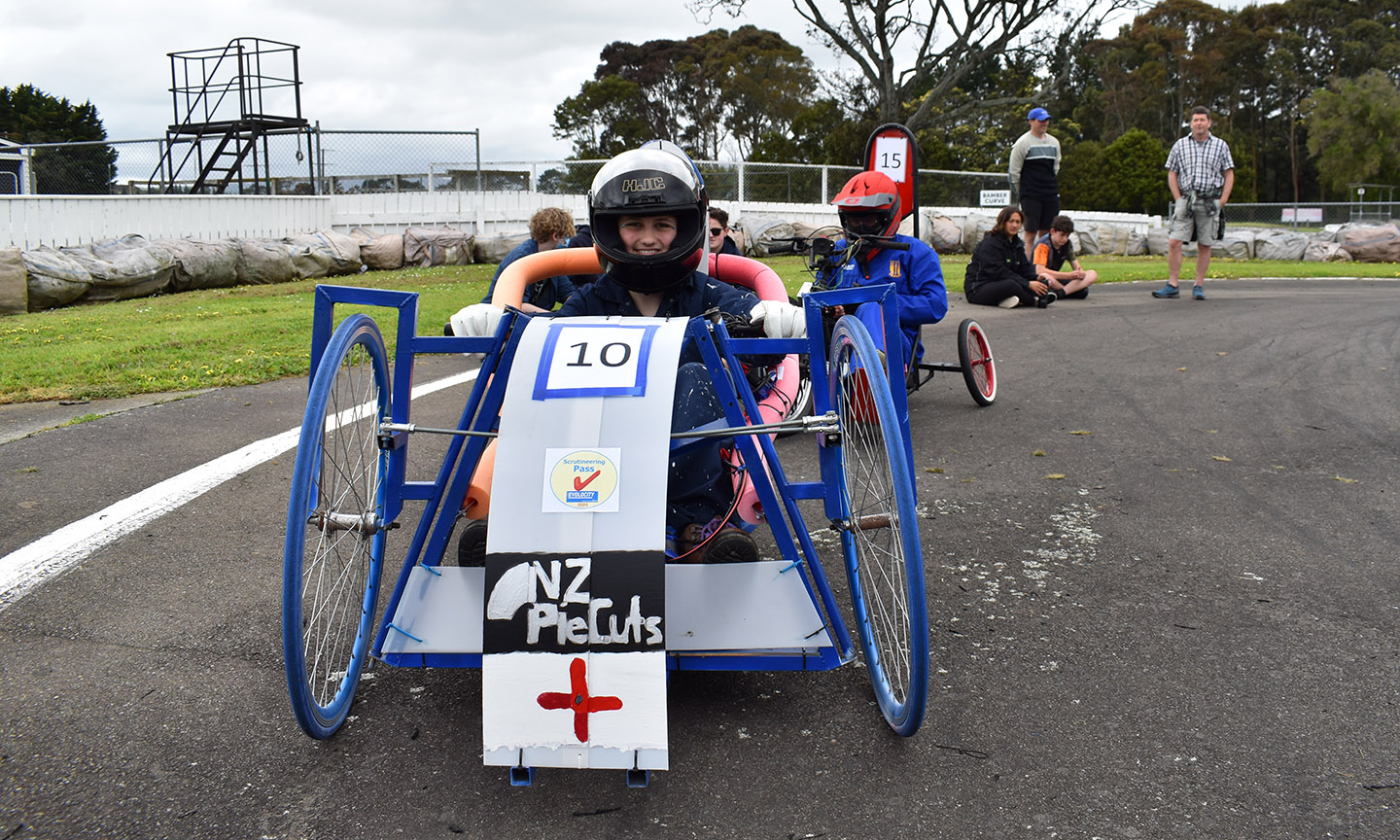 The annual EVolocity electric vehicle building challenge is a national competition for high school students organised in partnership with Orion. Sponsors for the Wellington-Manawatu region are Mello Yello E-bikes and Victoria University of Wellington’s Paihau-Robinson Research Institute. This is the eighth year this national competition has run, but the first year that a Marsden team has taken part. Students can choose to build either an electric bike or cart.

Over the course of the year, four Marsden students from Year 10 and 11, Jemima Jackson, Connie McLauchlan, Charlotte Cinque and Lexi More, worked together to construct their vehicle. The girls met most weeks to collaborate on the design and build process. With an eye on price, sustainability and the stringent safety and build requirements, our girls designed and built their cart out of old shelving, BMX handlebars and chain, water damaged wood, recycled wheels from a bike repair shop and a repurposed school chair. The electric motor was supplied by EVolocity.

EVolocity hosted several events throughout the year with a launch in April and workshops on using CAD, coding Arduinos, and the all important scrutineer sign off workshop. Unfortunately the welding workshop was cancelled at the last minute which was pretty stressful, however Mark Bouzaid of NZ Pie Cuts stepped up, teaching the girls to weld, and supplying his expertise, time and workshop. Without his support their project could not have come to fruition.

On 27 October the Wellington-Manawatu regional finals were held at Kartsport Manawatu in Palmerston North. The teams competed in several events: drag race, gymkhana, design talks, song/chant and an economy run. Disaster struck the Marsden team in the gymkhana when the chain came off but this was quickly remedied to complete the course.

The girls were extremely successful at the awards ceremony wining two of the four awards: Show Stoppers Impact on the Crowd and Event - Best in Show, and the Innovation Award for Engineering Excellence. They came second in the other two awards: Earth Care Recycled or Sustainable Materials with Low Demand on Environment, and Overall Performance. This was an outstanding achievement for our first time engineers.

Sincere thanks must also go to the parents of the girls who helped transport the vehicle and  supervised their attendance at the workshops throughout the year. Their support was invaluable and was another big factor in the successful completion of the project.

Congratulations to everyone involved.